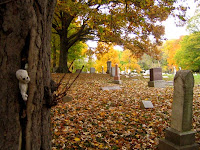 I know many of you are out enjoying this extremely colorific ( made this word up) Fall! You just never know what you'll find or when you'll find it. I discovered this little guy peeking out at me while taking a walk thru Crown Hill Cemetery. If you haven't been there, it's one of Indy's best kept secrets. It's full of history, beauty and many stories. Crown Hill Cemetery was dedicated in 1864 both to provide for the large number of American Civil War soldiers from Indiana who had died in the war as well as to provide for the crowding problems in the small 25 acre cemetery for the growing city of Indianapolis. The first burial took place on June 2, 1864 for a young mother named Lucy Ann Seaton, who died of consumption. Previously a private farm outside the city limits, Crown Hill Cemetery encompasses 555 acres. It sits on the highest geographic point in Indianapolis and is well known for the stunning view of downtown Indianapolis from "The Crown."

Did you know Crown Hill Cemetery is the largest refuge for animals in the city, including an estimated 300+ white-tailed deer? It contains 25 miles of paved roads and numerous species of trees, each of which is marked with a number that corresponds to its scientific name and its common name. Today it is a popular place for hiking, biking, picnics or just take advantage of some of the wonderful guided tours rich in history and area lore complete with tales of the rich and not-so-famous.

If you don't have a gun, here's a more humane way to wreck someone's evil plans for you. Did you know this? I didn't. I never really thought of it before. I guess I can get rid of the baseball bat. A report from a local police department states that a can of wasp spray, instead of pepper spray, is just as effective, if not better, to stop those pesky intruders. The wasp spray can shoot up to twenty feet away and is a lot more accurate, while with the pepper spray, they have to get too close to you and could overpower you. The wasp spray temporarily blinds an attacker until they get to the hospital for an antidote. You can keep a can on your desk in the office or in your car or any room of your house! It doesn't attract attention from people like a can of pepper spray would.

Thought this was interesting and might be of use. It’s inexpensive, easy to find, and more effective than mace or pepper spray. The cans typically shoot 20 to 30 feet; so if someone tries to break into your home, "spray the culprit in the eyes". It’s going to give you a chance to call the police; maybe get out. Maybe even save a life.

Just another "home tip" from your friendly realtor! Oh, and by the way, if you know anyone who is wanting to buy or sell a home, let me know. I'll include a free can of wasp spray!!!!!!
Posted by Patty Morton, CRS,ASP,ePRO at 11:03 PM