Okay, all you baseball fans.  Here's a great article on baseball in Indiana provided to me by my good friend, Morton Marcus.  Morton is known for his wit and his interesting presentation of indepth research of the economy.  I think you'll find it interesting and make you yearn for those hot dogs and fly balls!

Baseball offers opportunity and entertainment  The baseball season is here. Basketball and hockey are slipping behind us. Football lies ahead. This is the time to appreciate, to celebrate the excitement and suspense of our great American game.    We play baseball starting with T-ball where a youngster strikes at a ball that has been placed on a tee so that this early experience develops hand-eye coordination. Little league follows where the game splits into hardball and softball, but the game is essentially the same. Local businesses often sponsor our teams because they recognize the advertising benefit of putting their names on the chests of our children.    On through high school and college, baseball teams are found in small and large towns alike. Organized baseball leagues still function in 8 Hoosier cities.
At the top of the pyramid are the Indianapolis Indians, the AAA affiliate of the Pittsburgh Pirates these days, but a force in baseball for decades. The Indians play in a very comfortable stadium right downtown Indianapolis with a great view of the city acting as a backdrop for the game. Over time the Indians have been one of the nation’s most successful franchises.       Less exalted but no less true to baseball’s realities are the South Bend Silver Hawks (an A level affiliate of the Arizona Diamondbacks). They too play in a downtown stadium (named for Stan Coveleski, a Hall of Fame pitcher who played from 1912 to 1928 for several teams but was most successful with the Cleveland Indians).          In Fort Wayne the single A team is the Tin Caps (an apocryphal tribute to Johnny Appleseed). They are an affiliate of the San Diego Padres and play (surprise) in a downtown stadium, Parkview Field (named for a hospital system). 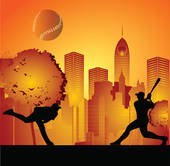 Downtown is now the place to be for a baseball team and a stadium is considered good for downtown. St. Louis and Cleveland are examples of major league cities that incorporated baseball facilities in their urban renewal plans.           Gary has done the same. The U.S. Steelyard (the delightful home of the Railcats) stands downtown in Gary, looking out on the Indiana toll road and the still vibrant mills across the highway. It was meant to be a stimulus to downtown renewal and may yet be a key element for progress when progress comes to Gary.          Down on the Ohio River, Hoosier honor is defended by the Evansville Otters who play in the 14-team Frontier League. Like Gary, Evansville is not affiliated with any of the major league farm systems.          Organized baseball is also played by the Terre Haute Rex, the Richmond River Rats, and the Dubois County (Jasper) Bombers. These three teams are part of the Prospect League where college players are weaned away from aluminum bats and taught to hit with real wooden bats.          Professional teams once played in Kokomo, Lafayette, Michigan City and Vincennes. We hosted the powerful Indianapolis ABCs of the 1920s (named for the American Brewing Company) and the famous Indianapolis Clowns of the Negro League. Indiana also fielded the South Bend Blue Sox in the AAGPBL (the All-American Girls Professional Baseball League) from 1943 to 1954 and the Fort Wayne Daisies (1945 to 1954).
For the players on today’s teams, baseball offers a career opportunity. For Hoosiers in the stands these teams offer appreciation of great game and a good hotdog.   = = = =
Mr. Marcus is an independent economist, writer and speaker formerly with the IU Kelley School of Business.
Posted by Patty Morton, CRS,ASP,ePRO at 12:58 PM